THE STORY OF OUR LOGO

Years ago, when Jonathan first went to Finland to teach, Tuula Nikulainen signed up for all three courses. She was the only one to do that. On saying good-bye it was clear that she was very excited about getting back to the forests of southern Finland, to incorporate her newly found power and knowledge into her life as felt-maker and artist. A year later, Tuula showed up on our doorstep.  “Here!” she said, and presented a beautiful felted poncho-like cape which she had crafted.

Pictured on the front and back was the story of her experiences visiting the Spirit World, framed by the shape of a shaman’s drum. We immediately fell in love with it. It was as if it was as made to represent our work, and so we embraced this drum-design as our logo/emblem. Tuula was very happy about this – and so are we! We have felt so grateful for it through all the years. Thank you Tuula!

THE IMAGE ITSELF TELLS A STORY
The oval shape shows the form of shaman drums in many Siberian and Saami traditions. In other cultures, the drum tends to be round. Sometimes it can be the wood itself that decides the shape of the frame. The old drums often have the drum skin painted with characters from the Spirit world. Shaman drums the world over can show the shaman’s personal map of the universe, with the cosmos often divided into three areas: the upper, middle and lower worlds. Tuula’s image shows this in a simple form. 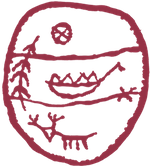 can move between the levels or worlds, and sometimes the image on the drum shows the opening or passage between worlds. On Tuula’s drum image this is shown by the Tree of Life connecting the three levels, sometimes referred to as the World Tree, that one can travel along. We recognize this story from many parts of the world, including Nordic cultures.

On the Middle World of the Drum image, you can see a boat manned with stylized figures. This is Tuula’s representation of a healing ceremony she took part in on the course, and shows the power of community.

Today, this felt mantle lives at in Dansstugan, the lodge at Åsbacka where courses and healings take place. Here it greets all who come to work with the Spirits.

You can see more about Tuula Nikulainen’s work at http://tekotuulahdus.blogspot.fi

Please Connect Me to your News
50%

To get more information direct to your home, sign up for our newsletter

You are free to unsubscribe at any time.